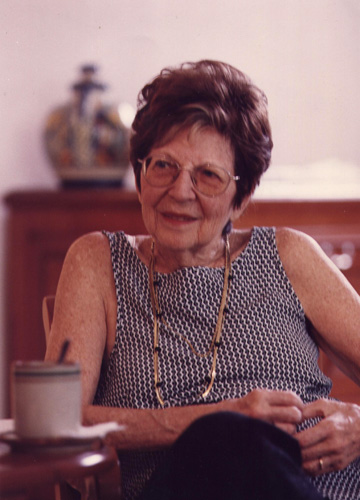 In the 50s, Bella Jozef travelled across Latin America to spread the word about a new breed of writers.

At the time when planes still flew very low in the Andes, passing in between the mountains rather than leaving them far below, my mother, Bella Jozef, who has died aged 84, was travelling across Latin America to spread the word about a new breed of writers: Julio Cortázar, Jorge Luis Borges, Gabriel García Márquez, Mario Vargas Llosa. My brother and I accompanied her on some of these trips, and I remember how we were sometimes trapped in a village for several days, when the clouds were too low for the planes to take off.

Bella was a brave, young, intellectual woman in the Latin America of the 50s. This was a time of dictatorship in many of the countries she travelled to. These authors were recognised for their literary merits, but there was also a political component in all this: honouring them was a way for publishers, booksellers, journalists, intellectuals and the general reader to protest against what was happening. Bella was clearly identified with the left and her teaching was under scrutiny during the years of dictatorship.

The daughter of Russian Jewish immigrants, Bella was born in Rio. She entered the Federal University of Rio de Janeiro at 15, and at 19 became assistant to the poet and professor Manuel Bandeira. She spent the next 65 years of her career at the university. As professor of Spanish-American literature, Bella led the department for many years and supervised numerous PhD theses and dissertations. After her retirement, she became emeritus professor and carried on teaching and supervising until the week before she died.

Her output was prodigious. Her straightforward style of writing made her popular outside academia and she published more than 500 articles on her favourite authors in the national press in Brazil, as well as 21 books. Bella was generous, affectionate and dynamic. She was never too tired to accept invitations to give public lectures and masterclasses and continued to be active until the end.

In 1949, Bella married Jorge Jozef, and he survives her, as do I and her son, Flavio, and three grandsons, Gabriel, Daniel and David.